The message of the cross isn’t a concept to grasp at one moment in time and leave behind. As Christians, the reality of the cross is the continual source of God’s grace needed to live each day. 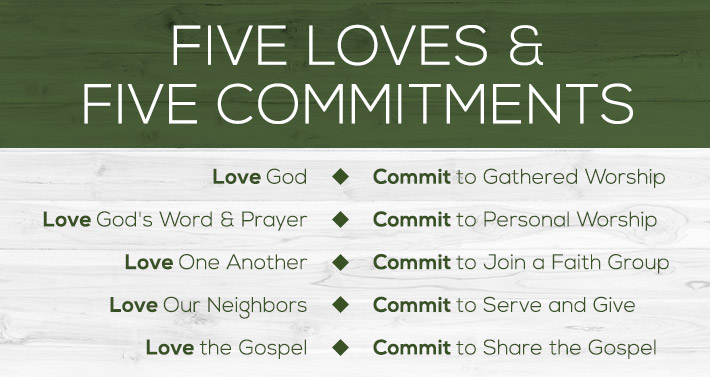 Jesus commanded His followers to make disciples of all the nations, (Matthew 28:19) and we are committed to carrying out that mission at Faith Baptist Fellowship. Our desire is to build a family of Christ-like believers who are proclaiming a cross-centered gospel and living cross-centered lives. To reach that goal, we have developed 5 Loves & 5 Commitments to keep us focused. Everything we do at Faith Baptist Fellowship flows from these tenets.

We think the Christian life has stages of development much like human life. From the point of birth to taking first steps to walking and eventually running, everyone is on a spiritual journey.

As a church, our goal is to make disciples and equip them for growth and service during each stage of maturity. From helping those who are exploring the claims of Christianity to encouraging long-time believers to grow, we want to encourage everyone who attends Faith Baptist to believe, live and share the gospel.

After making a commitment to follow and serve Christ, we encourage believers to be baptized and become members of Faith Baptist Fellowship.

Our Five Loves in Action

What we do on Sundays and throughout the week as a church flows out of our 5 Loves. Our ministries exist to put our 5 Loves into action!

Through preaching, prayer and singing, our goal is to unify the congregation at Faith Baptist in worship services that:

Faith University, our version of Sunday school, encourages adults of all ages to apply the gospel in all aspects of life. Most classes are offered from 9:55-10:45 a.m. on Sunday mornings, but Bible studies and other classes are also offered throughout the week.

Currently, Faith University is being offered only at our Faith Baptist South at 57th & Minnesota Ave.

All children are a blessing and our ministry exists to provide solid, biblical teaching starting in the earliest stages of life. Opportunities are available throughout the week for your children to learn about God’s love.

Nursery volunteers are eager to care for your children, birth to 3 years old.

During the sermon, we offer gospel-centered activities and teaching for kids ages 3-6 outside the main worship center. We request your child be toilet trained before attending.

At our 57th & Minnesota Ave. location, Faith University, our version of Sunday School is offered for three-years-old children through adults. Visit the Children’s Ministry Check-In Center on the 2nd floor to find your child’s class and receive registration instructions. We request your child be toilet trained before attending.

Through the Gospel Project ® for Kids [link: https://www.gospelproject.com/kids/], children age 3 through 5th grade participate in scripture memorization, engaging activities and lessons to realize the Bible is not just a collection of stories, but one unified story – God’s story of redemption. Kids are immersed in the gospel through every story, theological concept, and call to mission from Genesis to Revelation.

To sign your child up for Wednesday Night Children’s Ministry, please contact Leanne Pulling or Kaya Hall. We request your child be toilet trained before attending.

A volunteer staff of 15-18 caring adults works to create a loving and accepting place for students in 6-12th grade. We desire to help students clearly see the gospel. Students explore the gospel’s impact on life and weigh the decision to trust Christ as Lord and Savior. We also help students who have chosen to follow Christ to grow as disciples and begin bearing fruit as they serve God.

Living out the Gospel, Together

Faith Groups are gatherings of six to twelve adults who:

Adults of all ages are strongly encouraged to join a Faith Group. If you’re new to Faith Baptist, these groups will be essential in connecting you to the overall church family and helping you grow as a disciple of Christ. Faith Groups meet throughout the week, so you can find a time that works best for you.

Loving and Caring for People

Faith’s Care Ministry is one way that we endeavor to equip and empower people within our congregation to love each other well and to fulfill their purpose of being “God’s workmanship created for good works” (Ephesians 2:10a).

We all encounter trials, troubles, and temptation. Faith Baptist Fellowship strives to be a church where it is okay to not be okay, and where people are comfortable acknowledging their struggles and need for support and encouragement.

Our Care Ministry strives to activate the family of God at Faith Baptist Fellowship to care for and love one another as Jesus loved.

Meeting Needs in Our Community

The Kingdom Opportunities team works to meet physical and spiritual needs in our community, and beyond, through service opportunities.

We show Christ’s love to others by partnering with area ministries and provide short-term missions trip opportunities.

Share is our church’s benevolence ministry. Within certain limits, the Share ministry uses available funds to assist with basic food, housing, utilities, or clothing needs for losses due to economic or personal hardship.

Financial assistance is first considered for regular attendees of Faith Baptist (any residency) and then for other residents of Lincoln or Minnehaha Counties who are experiencing financial need.

Regular Faith Baptist attendees (of any residency) and non-Faith Baptist attendees who are residents of Minnehaha and Lincoln county can contact the church during office hours (M-F: 9 a.m. – 4 p.m.) to begin the application process by calling 605.331.3800. Assistance is considered for food, housing, utilities and clothing needs.

Spreading the Gospel Across the Street & Around the World