On April 30th, 2017 at a regular quarterly business meeting, the Faith Baptist elders invited the whole Faith family to prayerfully consider a “directive” to launch a second site in Sioux Falls. After months of prayer, research, discussion, and public forums, Faith Baptist voted overwhelmingly at a special business meeting on September 10th, 2017 to start a second site on the west side of town. Pastor Jayson was chosen to lead the effort and recruited 70 Faith Baptist adults and children to start Faith Baptist West. A special giving opportunity called “Stepping Forward” was also launched at that time. These funds helped start the west campus and were used to make some needed improvements to the south campus at 57th and Minnesota.

In early 2018, Faith Baptist voted to sign a 5-year lease for the current west campus building at the corner of 26th and Ellis Road. The first public service at Faith West was held on September 9th, 2018. Several months after launch, the Sunday attendance was already approaching maximum capacity. Faith West held two services for its first Easter Sunday in 2019 and had 7 baptisms that morning. Faith West began regularly holding two services by the first anniversary of its launch on September 9th, 2019. Attendance grew steadily to around 180 before the coronavirus pandemic in early 2020. Despite the recent setbacks of the pandemic, Faith West has proven to be a “hit” not only in terms of growth in Sunday attendance but in lives impacted for Christ.

What is the need?

There is a clear need on the west side of Sioux Falls for the kind of biblically faithful, gospel-centered ministry that Faith Baptist strives for. Knowing that the current lease only runs until 2023, the elders began discussing next steps at the spring retreat in 2019. A task force was assembled consisting of Pastor Jayson, TJ Philips (elder chairman), Matt Paulson, and Ben Whitley. The team conducted interviews and solicited feedback from west campus attenders. The feedback indicated that “westies” are truly excited about “their church.” They want to grow, serve, and reach out. There is great momentum. Many often ask, “What’s next?” One of the key factors that brings people to Faith West is the great location. “Please don’t move the church!” is something we hear often. Many guests visit because they move to the west side and see there is a church nearby. The past two years have been wonderful, and westies are extremely grateful for the location and facility. However, the smaller worship center and limited education space for Sunday school and other programs hinders the west campus from fully becoming all that Faith Baptist Fellowship values. The first two years have concentrated on gathering and connecting. The need now is for greater discipling, equipping, and serving which is the hallmark of Faith Baptist.

What exactly is being proposed?

The proposal from Peska would include a new ~5000 sq. ft. worship center and new nursery space to be built on the currently undeveloped land to the south of the existing west campus building (see the DRAFT layout). The current worship space (~2000 sq. ft.) and foyer would be remodeled into classroom space for a total of 7 classrooms. Additional restrooms will be included and a small kitchenette (not pictured). Peska would build the addition to suit at no up-front cost to Faith Baptist. Peska is proposing the church sign a new 7-year lease with terms comparable to the existing lease. This new contract would replace the current 5-year lease. The proposed completion date for the addition and start of the new lease is June 1st, 2021. 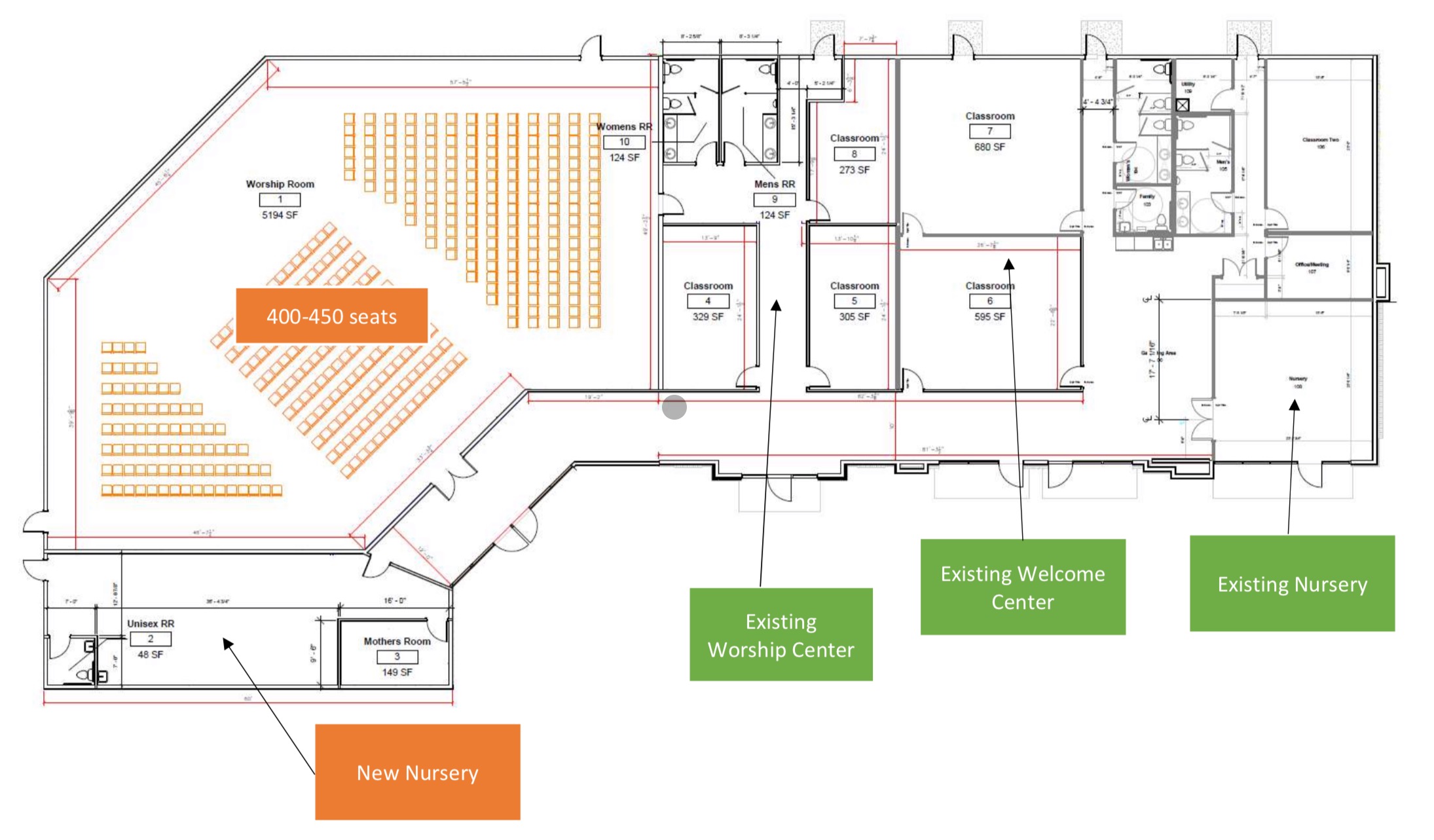 Why are we considering this now?

Peska’s overall site plan has been known for some time. With the completion of the Ellis Road expansion project last year, Peska is now ready to move forward with the development of the rest of the Ellis Road property. The prominence and visibility of the location make it very attractive. There will undoubtedly be interest. Peska has been very happy with Faith Baptist as a tenant and has essentially given “first right of refusal” to lease an additional portion of the space adjacent to our current facility. If additional ministry space at the current location is ever desired, the time to act is now.

What other options have been discussed/considered?

Many of these options are hypothetical and not based on anything available or possible at the moment. The two real options for discussion at this time are “upgrading” the current west campus facility or moving toward purchasing land and building a permanent location.

Why not purchase land and build a permanent building?

Based on the terms of the new lease, the expanded west campus facility would cost around $2M in lease/NNN payments and utilities over the seven years of the new lease. To buy land and build a comparable building* to what Peska is proposing would cost at minimum $5M according to the task force’s best estimates. To be more affordable, Faith West would likely need to move 1-2 miles out of town. This would be further away from the people the church is seeking to reach and serve. Also, several years of planning and heavy fundraising would be required to build. The church would likely need to raise close to $1M just for a down payment. Continuing to lease allows Faith West to focus on its immediate mission to make disciples of Jesus, equipping them for growth and service, rather than raising money for a building project. The elders do not believe that now is the right time for the west campus to purchase land and build a permanent building. However, the reception and momentum of the west campus encourages us to “keep going” and take additional steps of faith. Faith West has great potential to become an established ministry in west Sioux Falls for years to come. But the desired focus is ministry and growing the church as a group of people who embrace our 5 Loves and live out our 5 Commitments, not building and maintaining a large property at this time.

* It is worth noting that if the church decided to build before the 7-year lease was finished, Peska would release Faith Baptist from the lease if Peska were hired to build the new church building.

How would this get paid for?

The original intention was for Stepping Forward funds, along with gradually increased giving, to cover the operations and ministry costs of the west campus for the first three years. Praise God that the increased giving came even sooner than anticipated! The west campus has been supported by the Faith Baptist general fund since late-2019. Once again, there will be no up-front build-out costs for the new addition. Given the strong financial position of Faith Baptist as a whole, and overall giving trends since the west campus launch, the elders believe that the newly increased lease payments for the west campus can be included in the overall budget for 2021 and years to follow. Even during a pandemic, the faithfulness of Faith Baptist’s givers has been incredible!

What is the timeframe for this project?

Peska would like to begin construction this October. They will complete the new addition first, allowing ministry activities to continue in the existing space during the construction. Once the addition is complete, they will begin remodeling the existing space. The tentative completion date for the full project is June 1st, 2021. Peska has requested a decision from Faith Baptist by August of 2020.